I.M.E. stands for Individual Magical Effect. It was first described in The Spear update by Complains as what some call ... your "aura" or "the color of your soul" or whatever. Basically, everyone has their own inner light. As you gain more power, your IME can evolve. [1]

Thuntonian magic permeates pretty much the entire realm. Although this magic is in abundance, great care and skill is needed to access it before it can be converted to energy and burned up to power spells or magic items.

As each person converts magic into energy, they unintentionally taint it with their own soul, which is itself, a form of energy. Since souls are different and unique, each person contaminates the energy they’re creating in a different and unique way. To better understand this, imagine magic as water and the energy used to power a spell, as coffee. The spell caster is like the paper filter and the coffee grounds represent that caster’s soul. Obviously, the water can’t become coffee, without first passing through the coffee grounds, which need to be held in place by the filter. Now imagine that everyone’s coffee grounds are a different color. This results in each pot of coffee matching the color of the grounds. But no matter what the coffee looks like, it’s basically the same strength and taste for everyone. It’s just a different color.

This is basically how IME works. As the burning magic energy glows, that glow is a different color for everyone. Of course, sometimes someone’s IME color may appear to match someone else's IME color, but in ways that most mortals can’t detect, they’re always different.

How IME Is Affected By Levels[]

Ever wonder why a high level character has high bonuses in just about everything? Bonuses to hit, to do damage and even to display willpower. Sure, a lot of this is due to that character simply having more training and experience in the field, but characters can go up levels by doing things that have nothing to do with combat. Exploring the landscape, accomplishing tasks and “good role-playing” all grant experience points and thereby higher levels. How can this affect stats and bonuses? Then there’s the hit points. High level characters just have more hit points and as a result, can shrug off damage that would have killed them a few levels ago. Well again, this all comes down to the soul. Continuing with the coffee comparison, as a character goes up levels, their soul becomes more powerful. This is like adding more and more coffee grounds to their filter. This results in a stronger, more powerful coffee. The added coffee grounds intensify the coffee’s color as well, but not in the way you might think.

Just as a dream produces imagery that deeply reflects that character’s inner mind, IME can create imagery reflecting that character’s soul. As a character goes up levels, their IME begins to show imagery specific to that character. At first, this imagery is faint and discreet, but eventually it can grow to something visually spectacular.

Let’s use a hypothetical wizard as a typical example of how IME might progress. We’ll name him Rudy. When Rudy was a kid, he fell into an ancient, mass grave of a long lost tribe and was momentarily buried in dusty, old skulls. As a traumatizing event, this left a mark on his soul which helped shape who he grew up to be.

Rudy – Level 5 The orbs of green light have begun to loosely take the shape of skulls.

Rudy – Level 10 Large, terrifying green skulls orbit Rudy and glare at whatever he is focusing his magic on.

Rudy – Level 15 Rudy’s magic now creates massive, deep green skulls with brightly glowing eyes that shriek at the wizard’s target while he casts his spell. The shrieking is a ghostly, warped version of the screams he made as a boy in that open grave.

Rudy – Level 20 The intensity of Rudy’s IME has grown to legendary proportions and is whispered about by townsfolk in taverns and around campfires. It is said that if he casts a spell in anger, the very ground he stands on becomes forever scorched with the haunting imagery of horrifying, dark green skulls. And if you put your ear to the scorched ground and listen very carefully, you can faintly hear the panicked screams of a little boy. No one except the dark wizard, Rudy the Green will ever know what it means.

Applying IME To Your RPG Character[]

Here’s how I’ve used IMEs in my games of D&D… The player decides the color of their character’s IME as well as what it would look like at higher levels. The DM keeps a record of this and dictates what the IME appears as at what level. The player can’t decide at what rate the IME evolves. Although the player can choose the look and color of their character’s IME, the character has no say in the matter, anymore than they can choose the shape of their own nose.

Rudy is a loose guide to the rate of Thuntonian IME growth. It might be vastly different in your game.

Everyone has an IME, no matter what class they are. A fighter may not cast spells, but her IME still appears whenever she uses a glowing, magic sword or a magic ring that shoots fireballs. Anyone can choose to suppress their IME down to a barely visual, dim glow but it takes conscious, mental effort to do this. Rudy doesn’t want shrieking skulls to float around him every time he magically lights a candle in his study. But during battle, he’s unlikely to devote any of his attention toward keeping his IME down.

In rare cases, IMEs can present more than sights and sounds (in fact, not all IMEs ever emit a sound, beyond a muffled “BAWUMF” or something). Some IMEs create smells, slight changes in temperature to the surrounding area or even mildly affecting the emotions of those who are nearby. Drastic events can change a character’s IME, but this is very rare.

At present the IMEs of the Goblin Adventuring Party are beginning to develop distinct forms, such as Big Ears' yellow, small ring-wall. Chief's is slightly more intricate, in the form of an enlarged circlet and pauldron-like formations.

In the comic, also sound effects of actions by a character are in the IME color, which allows finding the IME of nonmagical beings.

Complains is not an enemy I would want to have. 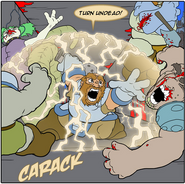 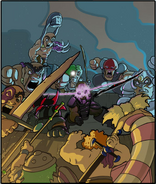